Benny Ricciardi darts from one end of his house to the other at 7:20 on a recent morning, unshaven, eyes sunken, wearing baggy sweats.

"This is what a daily fantasy sports player who was up until 2 in the morning looks like," he says sheepishly.

Rubbing his eyes, Ricciardi morphs into Mr. Mom for his three sons: Dylan, 7; Colin, 5; and Ethan, 6-months. He makes sure Dylan's hair is parted for picture day, Colin's shoes are knotted and Ethan is bobbing in his bouncer. Then it's out the door to Colin's bus stop and on to Dylan's school five blocks away, pushing Ethan in a stroller.

The money is more than he made working in finance, but Ricciardi says the best part about playing and covering daily fantasy sports is it allows him to carve his work schedule around staying home and taking care of the kids while his wife, Anna, works in talent management for Allied Building. And just by staying home, Ricciardi is saving the family $12,000 a year on daycare.

"I have to be honest," Ricciardi says. "It's basically saved my life. It's allowed me the opportunity to be around and raise my kids myself."

While Ricciardi touts daily fantasy sports, the billion-dollar industry with more than 56 million players in the U.S. and Canada is at the center of nationwide scrutiny. New York and Nevada have ruled that daily fantasy is gambling and have banned the games. Gambling counselors caution it can ruin families and lead to bankruptcy. And in New Jersey, two key federal lawmakers, U.S. Sen. Robert Menendez (D-N.J.) and Rep. Frank Pallone Jr. (D-6th Dist.), are pushing for the Federal Trade Commission to regulate the leagues.

"I live in fear every day that I'm going to wake up tomorrow and everything's going to be gone," Ricciardi says. "It would be devastating because this is my livelihood. This is how I'm making my money."

Daily fantasy sports allow participants to pay a fee to build a team of players under a salary cap and compete head-to-head or against thousands on a nightly, weekly and sometimes hourly basis. The popularity has led sites such as DraftKings and FanDuel to become billion-dollar juggernauts, and the thirst for information has spawned countless smaller sites and created jobs for people such as Ricciardi.

Ricciardi says he wagers around $8,000 weekly during NFL and NBA season out of his "bankroll" — a running pool of his winnings separate from family bank accounts. He has lost as much as $6,200 over a single week last year, but says that's rare. The difference between him and players who lose a lot of money is Ricciardi says he's just trying to "grind out a profit" rather than enter tons of major tournaments where the payout is huge but tens of thousands compete. Ricciardi says the key is relying on "bankroll management" — playing roughly the same 4 or 12 percent of his bankroll weekly whether he's been winning or losing.

To him, he's risking little due to his skill and restraint. 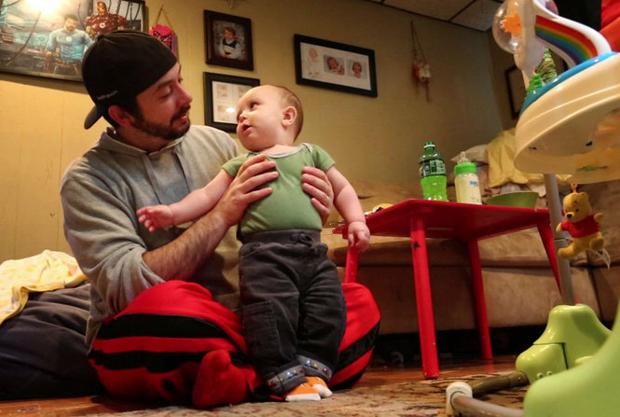 "The best players are going to win more often because they're just more skillful and better at building a roster," Ricciardi says. "If I follow the system that I follow, if I know I'm going to make a profit on it, is that gambling? To me, it's just investing, just like the stock market or anything else."

New Jersey lawmakers and industry representatives Monday debated what has suddenly become a hot question in government: Should daily fantasy sports be considered gambling and thus be regulated as such?

After dropping off the other kids, he sits Indian-style on the living room floor with Ethan. He speaks hypothetically about the NBA slate from the previous night, saying a move that could have paid off would have been to select James Harden for his lineup and not Russell Westbrook, the offensive focus with Kevin Durant out with an injury.

As he says it, Ethan shrieks.

"I know, I know," Ricciardi leans in and says to Ethan. "You yelled at me because I didn't play Westbrook. That's right. Because you always play Westbrook with no Durant. Right? Always."

"All right, I'll get your ba-ba-ba," Ricciardi says.

He mixes water and formula, heats the concoction, puts Ethan in a swing and places the bottle in his hand. In minutes, the baby is asleep.

"That's my cue to get to work," Ricciardi says.

As the 2015 NFL season approached, you couldn't turn on the television or flip on the radio without hearing the $205 million advertising campaigns from DraftKings and FanDuel. The ads suggested easy money and, as one DraftKings spot puts it, "This is the feeling of turning a game you love into a lifetime of cash."

Congressman Pallone calls the campaign "the trigger" that led to scrutiny of the industry.

In New Jersey, Sen. Jim Whelan (D-Atlantic) says he plans to introduce a bill requiring daily fantasy sports — as well as casinos that offer them — to be regulated and vetted in New Jersey the same as online gambling companies. Meanwhile, Pallone and Menendez have been told by the Federal Trade Commission it has the authority to investigate daily fantasy sports.

"This is all about legalizing sports betting and fantasy sports and regulating and creating transparency," Pallone says. "It's not about stopping it. Without any regulation, I don't think people have any way of knowing whether they're being treated fairly."

A point of contention is whether daily fantasy equates to gambling. Daily fantasy sports leaders steer clear of the term.

"The No. 1 reason people play daily fantasy sports is for the entertainment value — it makes watching games more fun and engaging," DraftKings says in a statement.

Neva Pryor, executive director at the council on compulsive gambling of New Jersey, says regulation is essential to protect consumers and those with gambling addiction.

"The definition of gambling is risk and skill, and whenever you're putting up money — that's gambling," says Pryor, who is urging daily fantasy sites to include the 800-GAMBLER number. "I want to make sure people have some place to go if they need help."

Ricciardi says the gambling argument is nuanced and that hours of effort go into successful playing. At the beginning of a typical NFL week, he studies every game matchup. If the Jets are playing the Giants, he sees the Giants have a weak secondary, meaning Jets quarterback Ryan Fitzpatrick will likely throw more often. Ricciardi uses a fantasy points projection system to predict how many yards and touchdowns Fitzpatrick will accumulate. Then, he divides the points projection by Fitzpatrick's fantasy price to get a total value. (Each player is assigned a weekly price determined by the site.)

Tom Brady may be projected more fantasy points, but he could cost twice as much as Fitzpatrick. If Ricciardi goes with Fitzpatrick at quarterback, he'll save money he can spend on other positions and have a player he still thinks will put up big numbers.

Ricciardi will then do similar projections for every player he considers.

Financial ruin from playing daily fantasy sports is the last thing on his mind.

"The stock market's gambling," he says. "Walking across the street is gambling. Starting a business can lead to bankruptcy. You can be an alcoholic and do that as well. Anything in life has the ability to be used or abused."

After putting Ethan down, Ricciardi sits in his home office — a converted walk-in closet. He flips on his 32-inch and 20-inch televisions, opens two laptops and sets down his iPad and iPhone. "I'm basically on one or all of these at one time or another," he says.

Ricciardi's wife, Anna, the family's traditional breadwinner, says she fully supports his career and does not put limitations of how much money he plays each week.

"He works like 60-70 hours a week at least and that's no joke," Anna Ricciardi says.

Benny Ricciardi has lived in the same Weehawken neighborhood his entire life and went to school at Seton Hall Prep, where he played basketball on state championship winning teams his junior and senior seasons. He went on to Delaware, graduating with a degree in marketing and economics. After college, he bounced around the finance industry as a bonds trader and financial adviser until he was laid off five years ago.

He then spent two years working for the Weehawken recreation department until deciding a year ago to stay home full-time and focus on daily fantasy sports. He's also an assistant varsity boys basketball coach at Weehawken High.

"It offers stability to the family," Anna Ricciardi says of her husband's present career.

As the baby snoozes, Ricciardi prepares to shoot a web video for RotoCurve. He finds a blue collared shirt with a blue striped tie already around the neck and an argyle sweater. He dresses, leaving on his red sweat pants, which will be hidden on camera. He takes a seat at his desk, positions his webcam.

"Hey guys, this is Benny Ricciardi with RotoCurve.com, and I'm here with our wide receiver picks for Week 11."

Although he works in the industry, he doesn't think he has a leg up on the competition he's playing against daily.

"The guys that I write up in the articles are pretty much the exact same guys that I play that night," Ricciardi says. "Everybody basically has access to the same information."

Moments later, Ricciardi's Twitter suddenly blows up. It's bad news: Massachusetts' attorney general has just proposed regulations to daily fantasy sports, including banning anyone under age 21 from playing. There's also speculation about keeping people who work in the daily fantasy industry from playing games themselves.

"Wow," Ricciardi says. "I might be searching for some work."

But the news in Massachusetts leaves Ricciardi rattled.

"I have a lot of money sitting in savings because I don't know how safe this income's going to be," he says.

Should he get a 9-to-5 job? Should he find something more stable? Anna Ricciardi says no.

"Everyone has the right to pursue their dream," she says.

Before his wife comes home, Ricciardi puts a chicken in the oven for dinner, picks up the kids from school, fixes a snack for Colin and changes Ethan's diaper again. Dylan looses a tooth and puts it under his pillow, announcing the tooth fairy has been paying $5 a pop.

Anna walks in at 5:32 p.m. The house is filled with the aroma of roasted chicken and broccoli. She kisses Dylan and Colin and snuggles Ethan. The family sits and eats.

Anna says she's scared daily fantasy will be banned one day in New Jersey "because that would just eliminate our second income." Plus, they would have to pay for daycare with her husband at a regular job. They say they're enjoying it while they can.

After dinner, Ricciardi retreats to his office to set his lineups. That night, he wagers $58 and walks away with $134.